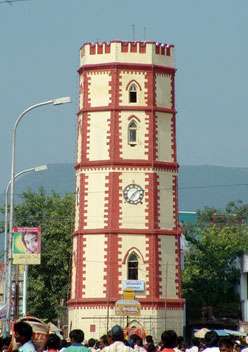 Vizianagaram is the main city of the Vizianagaram District of North Eastern Andhra Pradesh in Southern India. An important centre for commerce and education, the city is located 18 km inland from the Bay of Bengal and 42 km to the northeast of Visakhapatnam. Vizianagaram translates to the “city of victory”.

It is, at present, the largest municipality of Andhra Pradesh in terms of population. As of 2011 Census of India, the town had a population of 227,533. The climate of Vizianagaram is characterized by high humidity nearly all the year round, with oppressive summers and good seasonal rainfall. The summer season extends from March to May, followed by the southwest monsoon season, which continues to September. October and November constitute the post-monsoon or retreating monsoon season. The season extending from December to February is of generally fine weather.

500 Years of glorious past and rich cultural heritage made Vizianagaram the cultural capital of Andhra Pradesh. Many eminent personalities have added new dimensions of glory to Vizianagaram. The Raja Saheb Dr. P.V.G. Raju who inherits the socialistic fervor and the spirit of religious tolerance from his ancestors renounced his Zamindari without taking any compensation and their fort is now entirely becoming the citadel of education which houses one of the oldest colleges (Maharaja College 1879) in India.

The social reformer, Sri Gurajada, the Poet singer Sri Adibhatla Narayana Das, the great wrestler Kodi Rammurthy, the imaginative poet Sri Devulapalli Krishna Sastry were associated, with the college in some form. The talented musicians Dwaram Venkata Swami Naidu, Saluri Rajeswara Rao hail from this place. The divine singers Gantasala and Suseela who were the proud students of Maharaja College of Music added indescribable grace to the art of singing.

Railways
Vizianagaram railway station is on the Khurda Road-Visakhapatnam section of Howrah-Chennai main line and is the terminus for the Jharsuguda-Vizianagaram line. Many important trains have stoppage here.

Airport
The nearest airport is in Visakhapatnam which is about 62km from Vizianagaram.